Posted on November 5, 2019 by usjapanesegardens 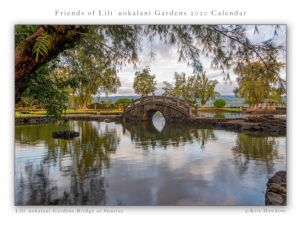 The fourth annual photographers contest to create a Friends of Lili`uokalani Gardens 13-month calendar for 2020 received digital entries from professional and hobbyist photographers.

Wood remarked, “For a photographer, joy is simply being there, even if the light doesn’t work to his or her advantage. Those who develop a passion for photography will tell of their joy in the actual capture of an image they have pre-visualized.”

Chairman Vijay Karai said, “Thirteen images from eight photographers will appear as featured images for each month. In addition, 26 thumbnail size images, two images to each calendar page, will round out the total view of the gardens.” 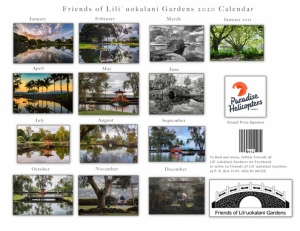 Taking Grand Prize is Kris Hawkins of Opihikao. His “Bridge at Sunrise” was chosen by the judge as the cover image and the featured photograph for the month of August. Charles Wood also selected three additional images by Hawkins for the featured images for the months of January, May, and July. In addition thumbnail images by Hawkins will appear in March and July. Grand prize is a doors-off helicopter ride with professionals Bruce Omori and Mick Kalber courtesy of Paradise Helicopters.

“I picked up photography in high school, back in the days of film. Just recently, I got back into it while backpacking and camping,” Hawkins said. “I love Lili`uokalani Gardens. It is such a surprise to have so many images accepted.”

Photographers whose work will be featured in the calendar and the months include: Jay Takaaze (February and April), Alan Kubota (November and December), Rita French (June), Kenneth Jackson (March), Faith Cloud (September), Lisa Schwenneker (October), and Lucy Fischer (January 2021). Takaaze was the cover winner for 2019 and Jackson for 2017. Fischer is a fifth grader who entered for the first time. Her thumbnail images appear in March, June, and July. 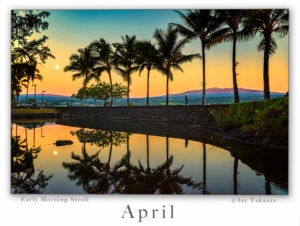 Graphic design by Ken Goodrich of Volcano, a well-known photographer and videographer, also brings a wealth of east Hawaii events to calendar production. Dates for every known activity from Merrie Monarch Festival to the KWXX Ho`olaulea are included. 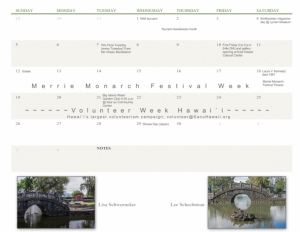 In this sample of a month’s grid, Hilo and state-wide events are listed along with two thumbnail images selected by judge Charles Wood

Printing by Hawaii Printing Corporation keeps all the work on Hawaii Island. Copies of the fund raising calendar may be purchased from KTA SuperStores at Puainako and Downtown in Hilo, Banyan Gallery on Banyan Drive near the Hilo Hawaiian Hotel, or Basically Books.  Friends of Lili`uokalani Gardens will have copies available at the annual Na Makua Christmas Gift Fair at the Afook-Chinen Civic Center Friday and Saturday December 6 and 7. 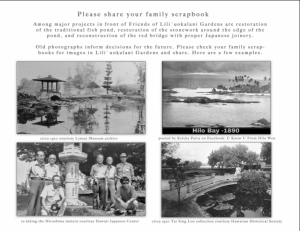 Also included in the 2020 calendar are two pages of historical photos with an invitation to the public to review their family scrapbooks and share images from Lili`uokalani Gardens.

A photographer’s exhibit will be part of the fourth annual Banyan Drive Art Stroll on Saturday, January 11, 2020.

Friends of Lili`uokalani Gardens may be contacted through the organization’s Facebook page or by writing to P. O. Box 5147, Hilo HI 96720.

To view any image in a larger size, just click on the image. Please respect the copyrighted images.

Thoughtful and curious comments are welcome. Spamers and scammers need not bother. All comments are reviewed before posting.