Posted on June 14, 2012 by usjapanesegardens 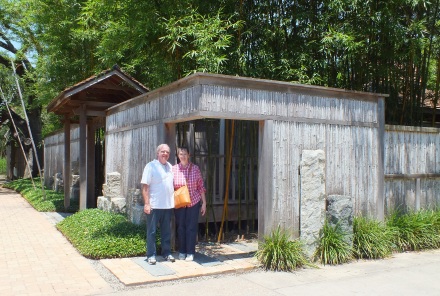 Michael Mitchell, the new president of the Japanese Garden Foundation of New Orleans and his wife Tina graciously served as our guides to Yakumo Nihon Teien, the Japanese garden in City Park designed by Robin Tanner.

“In a Japanese Garden”
By Lafcadio Hearn

“No effort to create an impossible or pure ideal landscape is made in the Japanese Garden. Its artistic purpose is to copy faithfully the veritable landscape, and to convey the real impression that a real landscape communicates. It is therefore at once a picture and a poem; perhaps even more a poem than a picture. For as nature’s scenery, in its varying aspects, affects us with sensations of joy or solemnity, of grimness or of sweetness, of force or of peace, so must the true reflection of it in the labor of the landscape gardener create not merely an impression of beauty, but a mood in the soul.”

In the midst of 1,300 acres in New Orleans’ City Park is Yakumo Nihon Teien, a garden that celebrates an important connection between New Orleans and her sister city Matsue City in Japan. Yakumo refers to Lafcadio Hearn, a writer who lived in New Orleans from 1877 to 1886 and whose house on Cleveland Avenue remains a registered historic place. In writing about New Orleans, Hearn brought to national attention the city’s Creole population and distinctive cuisine, Louisiana voodoo, and the French Opera.

Hern was sent to Japan in 1890 as a newspaper correspondent. During the summer of 1890, he obtained a teaching position at a middle school in Matsue, a town in Shimane Prefecture in western Japan on the seacoast. During the 15 months there, he married Koizumi Setsu. Late the following year, he obtained another teaching position in Kumamoto and during the next three years completed Glimpses of Unfamiliar Japan.

In 1896 after accepting a position teaching English literature at Tokyo Imperial University, he became a naturalized Japanese citizen and assumed the name Koizumi Yakumo. He continued teaching and writing in Japan until shortly before his untimely death at the age of 54 in 1904. He is considered a national treasure in Japan.

There are other Japan-New Orleans connections. “The first Japanese consulate outside of New York was in New Orleans starting in the 1920s. After Hurricane Katrina, it moved to Nashville,” said Mike Mitchell, new president of the Japanese Garden Foundation.

Barrier-free access is along this entry with a carefully pruned bamboo thicket.

The dream of the Japanese Garden Foundation of New Orleans, starting back in1985, came into being with the opening dedication of the first increment of this garden in July 2005. When Hurricane Katrina hit a month later, everything was under more than a foot of water and many of the plants were lost in the flood. Major stonework and other physical elements sustained no major damage and the garden was quickly restored with the addition of a machiai, a small structure with a bench that offers a wonderful view. The garden had a grand re-opening in 2007.

view from a bench in the machiai

The garden was recently expanded, doubling its size. A wisteria arbor, stone pathways, and more fencing were added. Another expansion is hoped for in the future when an adjacent park administration building relocates to new quarters. “Future expansion would allow for a water feature,” Mitchell said. 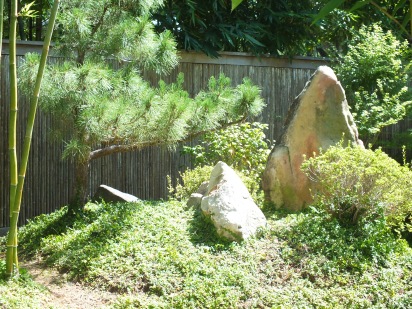 Significant stones used in this garden were selected at the quarry in Tennessee and hauled by landscape architect Robin Tanner.

Robin Tanner, garden designer, is now at work on a book outlining the peaceful, contemplative nature of gardens.

“We couldn’t make this as beautiful as it is without the help of dedicated volunteers,” Mitchell said. “Daily maintenance is the key.”

Bill and I are so often wrapped up in “getting the story” and “framing the photo.” It’s important for us to sit still and enjoy the surroundings. Many thanks again and again to Mike and Tina for making that possible.

The Westervelt Company in Tuscaloosa, Alabama

Posted on June 3, 2012 by usjapanesegardens

An artful garden sits amid four buildings, the headquarters of The Westervelt Company in Tuscaloosa, Alabama. Formerly known as Gulf States Paper Company, the company’s recently retired president Jack Warner served in Burma during World War II. His time there and his frequent travels to Japan informed the design of the corporate headquarters and garden.

All four buildings are connected by exterior walkways offering varying views of the central garden, inspired by gardens at Katsura Imperial Villa in Kyoto, Japan.

The buildings also house the Tuscaloosa Museum of Art, home of the Westervelt Collection, an extensive collection of paintings, furnishings and sculpture from around the world.

Garden construction began with construction of the office building in 1969 and both were completed in 1972. We were told that Mr. Warner closely directed landscape architect David Engel to achieve his vision — a garden in which quietude brings a sense of the oneness of all: heaven, earth and man. “We begin to feel our relationships to all the universe, where everything is forever changing in form, ever renewing,” according to an old brochure provided by the company. 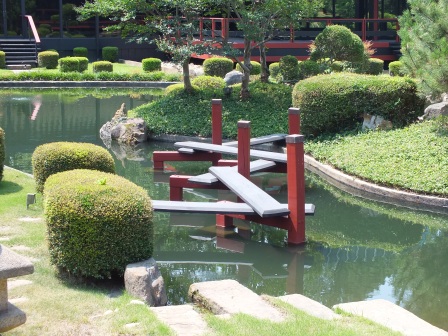 A company brochure describes this bridge saying: “One legend says that the traditional zig-zag bridge was first built this way so that people on foot could escape their enemies on horseback. Another more practical reason is so the visitor can view the garden from different angles.”

closer view of the waterfall

The entire pond was recently drained and leaks repaired. Koi have not been reintroduced to the pond. Several small goldfish were visible on this visit.

Arrangements to visit the garden and the art collection must be made with the company.

Update: The Tuscaloosa Museum of Art, featuring the Westervelt Collection, will be permanently closing effective Friday, August 31, 2018. Thank you for your support and patronage of the Museum.