Some have asked, “Where did you stay on your trip?”

Here is a simple list, town by town, with links to the inns, hotels, and bed & breakfast inns on several trips from May 2012 through July 2016. A listing here does not imply a recommendation. Most were wonderful and I tell my friends about them. Some I would never choose again.

Our basic criteria was historic or boutique hotel, smaller property, convenience in closeness to gardens we wished to see or to the train station, especially for those early morning departures. We also wanted a reliable internet connection. 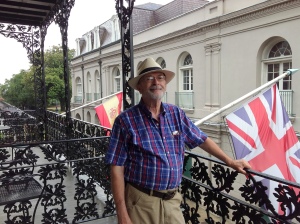 Bill with his new hat on the balcony outside room 301 at the Place d’Armes on St. Ann Street; Jackson Square trees visible one block behind him.

the William T. Sherman Suite at the Menger Hotel in San Antonio

lobby at the friendly Historic Hilton Fort Worth

Fort Worth: The Historic Fort Worth Hilton 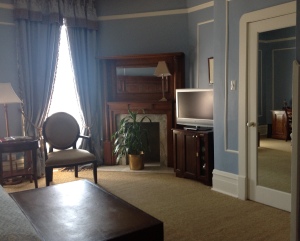 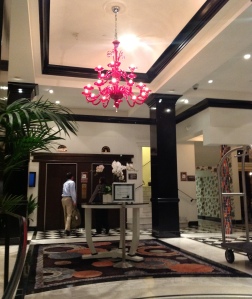 Murano glass in the front lobby

front parlor of the Queen Anne Bed and Breakfast Hotel on Sutter Street in San Francisco where coffee, tea and cold water are on hand 24/7

The second trip in October started in San Diego at La Pensione right in the middle of Little Italy at a corner of Date Street where the Saturday Farmers’ Market happens. Since we visited, the entire hotel has been redone.

At the cornet of Date Street, the hotel — La Pensione — is to the left.

We took a train to Albuquerque, NM on our way to the Connections conference held by the North American Japanese Gardening Association (NAJGA) in Denver. In Albuquerque we stayed at an organic lavender farm and historic inn, Los Poblanos in the Los Ranchos area of Albuquerque where our room was the Girard Guesthouse decorated with Mexican folk art and cobalt tile.

In Denver for the NAJGA conference we stayed at the Sheraton Denver Downtown, most convenient to the 16th Street Mall shuttle.

Built in 1929 the Arizona Biltmore resort was designed by Albert Chase McArthur, a Harvard graduate, who had studied under Frank Lloyd Wright from 1907 – 1909 in Chicago. The lobby ceiling is gold leaf.

On our way back to California, we stopped in Phoenix and stayed at the Arizona Biltmore Waldorf Astoria built in 1929.

a portion of the upper garden

entryway to Kyoto Gardens at the Hilton DoubleTree in Los Angeles

In Los Angeles, we stayed in walking distance of Little Tokyo at the Hilton DoubleTree, a former New Otani and Kyoto Gardens hotel. The third floor rooftop garden is still in good shape and the two rooftop restaurants were undergoing renovation when we were there.

Order from a menu, individually cooked breakfasts in a comfortable parlor with fellow travelers from around the world…

Back in San Diego, we stayed near Balboa Park at the Britt Scripps Inn where very kind and considerate staff easily accommodated an extension on our stay due to an emergency appendectomy for my husband.

This journey was planned around our son’s wedding in Washington DC plus a regional conference held by the North American Japanese Garden Association (NAJGA) in Philadelphia. We traveled by Hawaiian Airlines non-stop from Honolulu to New York City then got on a train for Boston.

We stayed at the Hilton Back Bay in Boston, which put us in walking distance of Tenshin-en at the Museum of Fine Arts. Bill says the best oysters of the entire trip were next door at the Summer Shack [ http://www.summershackrestaurant.com/Locations_Boston.asp ]. Walking distance to Boylston Street, the Fens, Fenway Park and many other attractions.

Continuing on to Brooklyn, we stayed at the Akwaaba Mansion in Bedford-Stuyvesant. One block away is the famous and fabulous Peaches restaurant — two delicious meals there. In another direction within walking distance is the subway line for connections to NYC in one direction or in another direction other communities on Long Island.

In Philadelphia for the NAJGA regional conference, we stayed at the Crown Plaza West, which had a convenient laundry room in the lobby.

In Charlottesville, Virginia, we stayed one night — and hope to return for more some day — at The Inn at Monticello. This 1856 home has been well-maintained and with many modern improvements augmenting the traditional decor. The breakfast was ample and delicious, featuring locally grown ingredients wherever possible. Bob and Carol are thoughtful and compassionate hosts.

a warm and welcoming living room at The Inn at Monticello 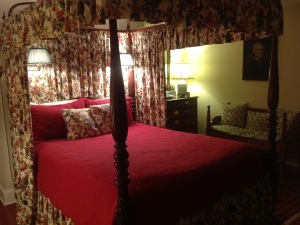 morning coffee on the front porch

In Richmond Virginia, we stayed at Grace Manor Inn [ http://thegracemanorinn.com/ ] in the Fan District, one block from Monument Avenue and easy driving distance to Main Street restaurants, Carytown shopping, and several gardens and museums. [UPDATE 2015, Grace Manor was up for sale. Uncertain of present status.] 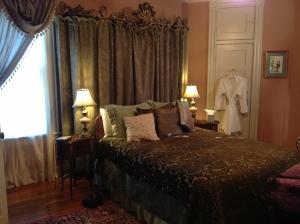 Zimmerman Suite, up three flights of stairs, quiet and comfortable, with a second room for business at the desk and feet up reading or television

In Washington DC, we stayed at Akwaaba DC near Dupont Circle, which is convenient to the Metro and serves an exceptional breakfast.

For the wedding, our son treated us to three nights at the Wyndham in Old Town Alexandria where a free trolly carted us up and down King Street. Convenient to the Metro.

Back in New York City, we had two nights at the Hilton Hampton Inn Manhattan, which is midtown near the United Nations and in walking distance to Grand Central Station.

In September, son Bill and wife Anita accompanied K.T. to Paris — close enough to their wedding anniversary to make the trip a present. We stayed several nights at the St. James Albany on Rue de Rivoli, an historic thoroughfare within easy walking distance of the Louvre and across the street from Jardin des Tuileries. The nearest Metro stop was a half a block away. 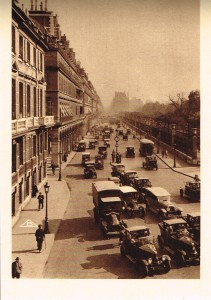 Rue de Rivoli in the 1920s, K.T.’s grandmother’s postcard. A copy of this image was sent to the concierge with several questions. His comment on the postcard: “Still looks the same except the cars are different.” 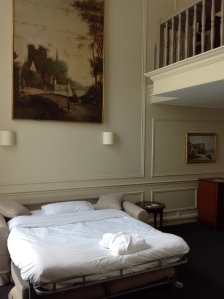 Son Bill went back to work while Anita and I continued by train on to Giverny where we stayed overnight at Marie et Gilbert Therin bed and breakfast, an easy walk through the town to the home and garden of Claude Monet. There is only one bedroom so you have their full attention. The breakfast was the most abundant and delicious of any B&B I’ve ever visited. 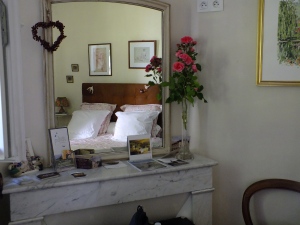 After a train trip through the “chunnel,” in London, it was all about location, location, location so we stayed at the Trafalgar directly across from Trafalgar Square and within easy distance of museums, shopping, and a concert at St. Martin of the Fields. The double-decker buses stopped right outside the hotel entrance and the underground was across the street. 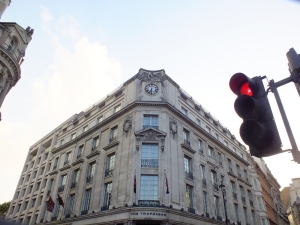 our room is on the fifth floor behind the clock, windows on either side look through stone balustrades 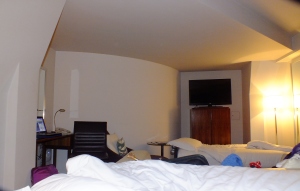 inside the clock, this rounded wall with one flat panel for the desk and one for the television and refrigerator, and two comfortable beds

Lord Nelson at Trafalgar Square on a rainy Saturday morning 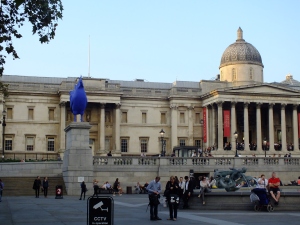 Trafalgar Square, The National Gallery and one big blue chicken

Seattle in May: stayed with a friend at her apartment on Capitol Hill

Calgary in May: Delta Bow near convention center

view from the room 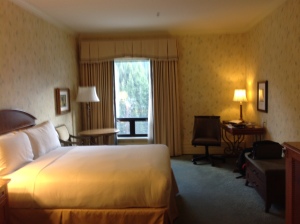