Posted on October 24, 2019 by usjapanesegardens

The United States Postal Service announced a set of 10 gardens to be issued on stamps in 2020.

The first U.S. garden on a stamp was Lili`uokalani Gardens in Hilo on a Priority Mail stamp in 2017, marking the centennial of Hilo’s treasured cultural landscape.

Other gardens in the new Forever stamp set that also have Japanese gardens within their boundaries are Stan Hywet Hall and Gardens (Ohio), Huntington Botanical Gardens (California), and Brooklyn Botanic Garden (New York). 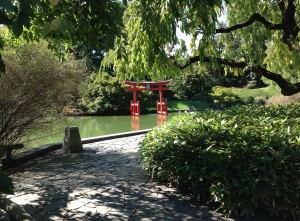 Posted on January 27, 2017 by usjapanesegardens

Today’s entry will share a few photographs from the stamp dedication event held at Shoroan Monday, January 23, sponsored by the USPS, County of Hawaii, and Friends of Lili`uokalani Gardens.
Since the official First Day of Issue was Sunday, January 22, in Kansas City, Missouri, the best we could do was make the cake into a first day cover, complete with Hilo postmark. 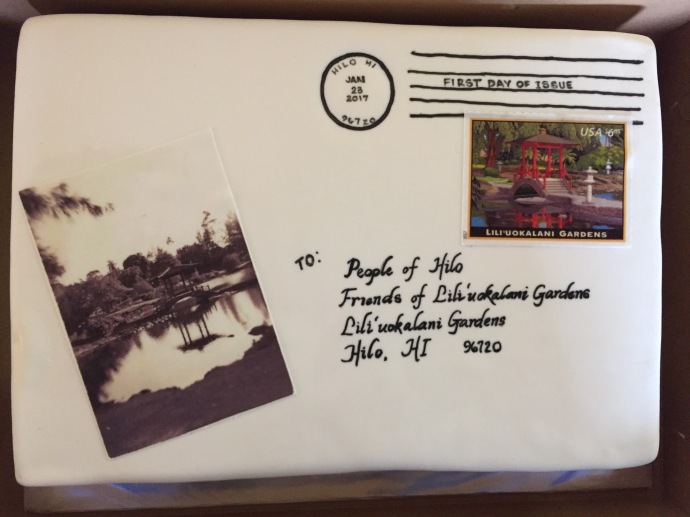 Dedication remarks were offered by Rose Bautista on behalf of Mayor Harry Kim. 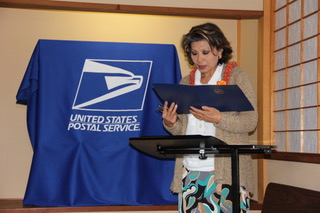 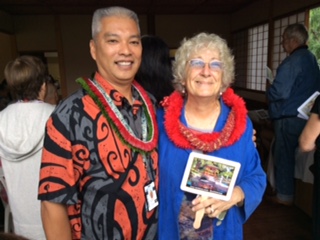 The stamp committee that made the proposal was recognized with lei from Friends of Lili`uokalani Gardens. 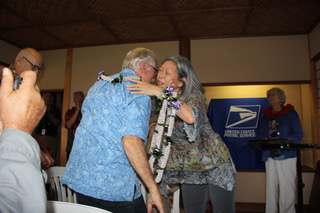 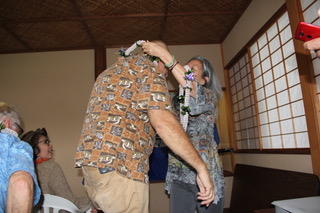 Jane gives a lei to Anthony Kassel, author of a book on Hawaiian Missionary stamps
photo by Don Scott 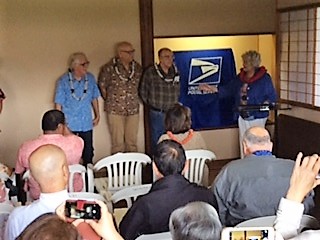 the stamp committee that made the proposal
photo by George Applegate 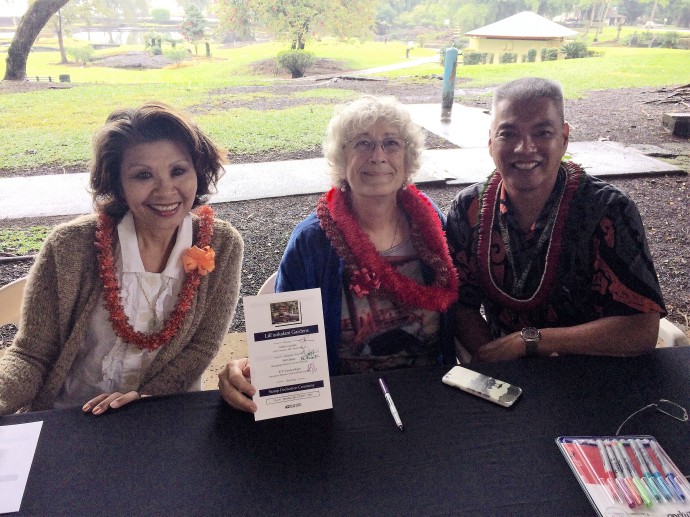 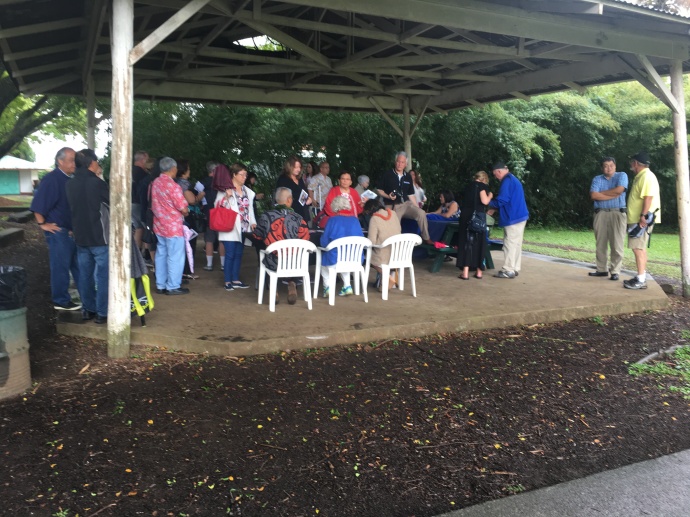 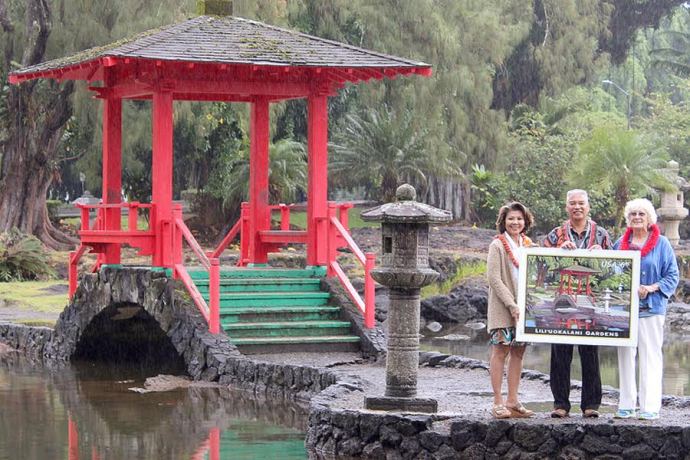 standing on the zig-zag path, holding an enlargement of the stamp are Rose Bautista, Alton Uyetake, and K.T. Cannon-Eger
Photo by USPS Duke Gonzales

Stamps are available at Post Offices across the nation and online.

Approximately 50,000 stamp proposals are made each year, subject to review by the Citizens’ Stamp Advisory Committee. Final decision rests with the U.S. Postmaster.

Posted on January 22, 2017 by usjapanesegardens

Lili`uokalani Gardens joins a select group of iconic features on the American Landmark series of Priority Mail and Express Mail stamps, which began in 2008. Previous stamps in the series include the Columbia River Gorge, Mackinac Bridge, Mount Rushmore, Hoover Dam, Old Faithful, and Grand Central Terminal to name a few. The other Hawaii image in the series was USS Arizona Memorial, an Express Mail stamp released in 2014.

“Art Smith and Tony Kassel came up with the idea in 2013,” said past president Bill Eger. “Four of us met and hammered out a one-page proposal that was submitted to the Citizens’ Stamp Advisory Committee in August. Two months later we heard that the proposal made it through the first round and the proposal would be heard by the Committee.” 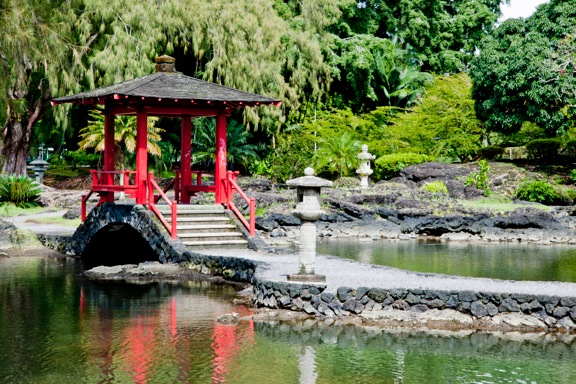 A sunny day in Hilo at the zig-zag path leading to the red bridge…
photo by Bill F. Eger April 2012

Two years passed before the next word was received in August 2015 that a company was researching possible designs and wished to use one of Mr. Eger’s photographs from 2012 of the iconic red bridge and three lanterns.

Detailed research behind every U.S. postage stamp issue is lengthy and precise.

“We are grateful to one of our board members, Kenji Kuroshima, and his wife Michelle for a detailed new map of all the lanterns and monuments in Lili`uokalani Gardens,” said K.T. Cannon-Eger. “Additional research was done with Pat Okamura and Professor Masafumi Honda at the Hawaii Japanese Center. Another board member Glenn Miyao helped locate an old map in County Parks & Recreation Department files.

“This research helped answer questions from PhotoAssist Inc. such as: Where did these lanterns come from? How long have they been there? Who designed the lanterns? Was the red bridge shelter original to the garden? What happened in the tsunami of 1946? 1960?

“On December 28, 2016, we heard the news. It was official at last. The stamp would be issued in 2017. What a great New Year’s present for Hilo, for Lili`uokalani Gardens’ centennial, and for Japanese gardens everywhere.”

In early January, 2017, we received a phone call from Duke Gonzales of the U.S. Postal Service in Honolulu telling us the date for first release of the stamp. Planning began immediately for the dedication event Monday, January 23.

Stamps are available for sale online and at Post Offices across the nation. The USPS will have stamps and hand postmarking available in Lili`uokalani Gardens Monday, January 23, following dedication ceremonies.