The first issue of the Journal of the North American Japanese Garden Association features a view of the tea deck at Sho-Fu-En in Denver Botanic Gardens.
photo by Bill F. Eger

The first issue of The Journal of the North American Japanese Garden Association arrived in our mailbox the other day and it’s gorgeous! Within heavy cover stock are more than 60 pages of well written, beautifully illustrated articles.

Topics in this inaugural edition include an extensive article by Robert Karr on The Garden of the Phoenix in Chicago — which article has been translated into Japanese. The story celebrates the 120-year history of the garden and looks toward the future with plans for mass plantings of cherry trees in the lagoon nearby.

It is followed by a detailed account of a garden now gone: Middlegate Japanese Gardens of Pass Christian, Mississippi by landscape architect Anne Legett.

As Journal editor Kendall Brown points out, “The former garden’s bright future and the latter’s forlorn state signal the fragility of gardens and the need for careful stewardship.”

An article on interpretive education offers case studies on docent tours, ephemeral and permanent signs, and new technologies such as cell phone guides.

Jill Raggett, Ph.D., is a specialist in the emergence of Japanese style gardens in the British Isles, historic garden restoration, and biographies for the Japan Society. This distinguished speaker offers her view of the first conference of NAJGA — Connections — held October 2012 in Denver, Colorado.

Finally there is a book review of a reprint of the 1940 work by America’s first Japanese garden expert Loraine E. Kuck, well known to Hawaii garden folk for her books and garden designs here. Miyuki Katahita-Manabe, Ph.D., of Osaka notes in her review: “The reprinting in 2012 of Loraine Kuck’s The Art of Japanese Gardens, first published in 1940, provides an opportunity for reassessing this important book that introduced many English-language readers to the cultural history of Japanese gardens.”

The Journal is a benefit of NAJGA membership. It was made possible through the support of The Japan Foundation Center for Global Partnership. Japanese language translation service were provided by Matsuda, Funai, Eifert & Mitchell, Ltd.

For more information, go to http://www.najga.org

Cover photo for The Journal by Bill F. Eger. Comments on this and other articles in this blog are welcome.

The Hawaii Tribune-Herald published an article Tuesday, May 14, 2013 on plans underway for two related centennials in 2017: the passing of Queen Lili`uokalani and the dedication of land for a large oceanside park in her name in Hilo. Here is a link to that article with a photo by Bill F. Eger.

A new look at Japanese gardens in North America — Quiet Beauty — provides the viewing public with detailed information and delightful photographs on 26 peaceful places across the continental United States and into Canada.

Released by the esteemed publishing house Tuttle Publishing, this beautiful book offers history and invites thoughtfulness on how these gardens came to be and what they offer to us now. Insightful text is accompanied by more than 180 stunning color photographs and a few reproductions of antique postal cards.

In the introduction — Places to Dream — Dr. Brown notes, “Japanese gardens or, more accurately, Japanese-style gardens, in North America offer distinct pleasures. In contrast to the cacophony of cities, the anonymity of suburbs, and even the anxiety of deserts or forests, these gardens can provide beautifully controlled environments. In artful landscapes we lose ourselves in a path woven around a pond and a harmonious stone arrangement; we delight in the variegated colors of graceful koi and the bright hues of blossoming plums; and we are calmed by a stream’s gentle murmur and the dappled greens of moss. Another kind of pleasure is contextual and social rather than sensory and psychological. Japanese gardens in North America are often found where we least expect them, and in places unknown in pre-modern Japan. Thus we feel a special delight in discovering a ‘dry garden’ of stones and sand at a museum, a lush pond garden on a college campus, or a waterfall-fed stream garden in a hospital. Those familiar with gardens in Japan may also enjoy Japanese-style gardens intellectually, noting creative plant substitutions or thoughtful ways of interpreting Japanese design principles within distinctly North American spaces.”

Dr. Brown takes three eras posited by garden historian Makoto Suzuki of the Nodai Institute, professor at Tokyo University of Agriculture, and expands them to five: the age of world fairs and expositions, building bridges, innovation by adaptation, expansive visions and traditions transformed.

During the past ten years. I have read many articles by Ken Brown and have heard him speak at several conferences. I serve on the editorial board of the North American Japanese Garden Association (NAJGA) which editorial board he chairs. In person, I can verify that Dr. Brown delivers a substantial amount of information in a short amount of time — all of it masterfully accompanied by photographs, post cards, newspaper clippings and other visual aids along with a good sense of humor and split second timing. There are times I have felt he is delivering information faster than I can absorb it so I am delighted to have such a beautiful volume I can savor at leisure.

I have a special appreciation for David Cobb’s photographs. My husband and I have been to many of the places depicted and know what it takes to get the perfect image of that spot. So many of Cobb’s shots are truly breathtaking.

Gardens featured in Quiet Beauty: The Japanese Gardens of North America are:

Japanese Garden in the Fort Worth Botanic Garden, Fort Worth Texas 1973;

Tenshin’en at the Boston Museum of Fine Arts, Boston Massachusetts 1988;

Marvelous additions in the appendices include garden contacts and a select bibliography including books, journals and websites plus a listing of 75 important Japanese gardens in North America, five of which are in the state of Hawaii. 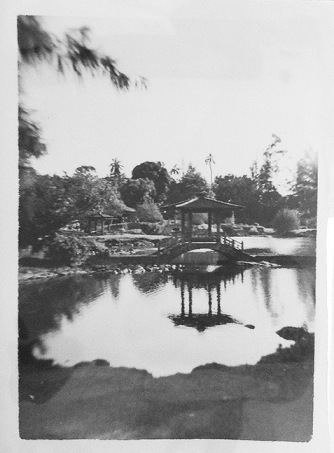 Lili`uokalani Gardens on December 17, 1944 from the library of the Hawaiian Historical Society in Honolulu

For more information on Quiet Beauty: The Japanese Gardens of North America and other books available from Tuttle Publishing, please consult the web site