Taniguchi’s gift to the city of Austin

Posted on July 15, 2012 by usjapanesegardens

The Isamu Taniguchi Garden at Zilker Botanical Garden undoubtedly has the best view of Austin, Texas.

“The best view in town” according to one garden volunteer is from the Isamu Taniguchi Garden at the Zilker Botanical Garden.
(photo by Bill F. Eger)

Many thanks are due Marion Alsup for her hospitality during our recent visit to the Taniguchi Garden at Zilker Botanical Garden in Austin, Texas. She greeted us at the train station, hung cool scarves around our necks, pressed bottles of water into our hands, plus she organized other garden personnel to meet us on site to answer additional questions . Alsup is vice president of the Austin Area Garden Center with responsibility for education and president of the Docents of Zilker Botanical Garden. She provided running commentary as we toured the winding trails. 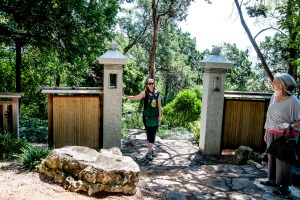 Marian Alsup and Donna Friedenreich explain the Sister City relationship with Oita, which gave this stone gate to the garden.
(photo by Bill F. Eger)

Three acres of rugged caliche hillside were transformed into a garden in the late 1960s by Isamu Taniguchi when he was 70 years old. Working for 18 months with occasional help from two parks and recreation department staffers, Taniguchi brought forth his gift to the city of Austin first in gratitude for the education that his two sons received there and second in an aspiration for peace.

lantern at top entry to the garden
(photo by Bill F. Eger)

Taniguchi was born in Osaka, Japan. By the age of 16 he was raising bonsai. Migrating to Stockton, California in 1915, he farmed vegetables and fruit, returning to Japan only once to marry. During World War II, he and his family were interned in California and Texas. The family moved to the Rio Grande Valley at the end of the war to continue farming.

The Austin Area Garden Center and the Parks and Recreation Department could not turn down his generous offer of a garden. Working without a salary, a contract or a written plan, Taniguchi showed up for work, rain or shine, and created paths and streams, waterfalls and ponds, stone arrangements and plantings. The garden opened to the public in 1969. Taniguchi’s son Alan was Dean of the UT School of Architecture that year.

An essay by the elder Taniguchi – The Spirit of the Garden – describes not only the garden, but its builder:

“It has been my wish that through the construction of this visible garden, I might provide a symbol of universal peace. By observing the genuine peaceful nature of the garden, I believe that we should be able to knock on the door of our conscience, which once was obliged to be the slave of the animal nature in man rather than of the humanity which resides on the other side of his heart. It is my desire for the peace of mankind which has endowed this man of old age the physical health and stamina to pile stone upon stone without a day’s absence from the work for the last 18 months. It is my desire for peace of mankind which encouraged me in my voluntary labor to complete this long-dreamed gift for the city of Austin – this Oriental Garden. It is my wish that you have pleasant communion with the spirit of the garden.” 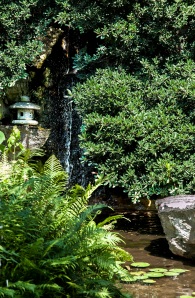 A small lantern and a hidden waterfall are part of the ponds that spell out “Austin.”
(photo by Bill F. Eger)

A rustic wooden log Togetsu-kyo or “Bridge to Walk Over the Moon” is nearby.

The final pond holds lotus Taniguchi raised from a seed from Japan and several varieties of water lily. There is a small central island in the shape of a boat with stepping stones through the pond in the shape of the boat’s chain and anchor.

The lowest pond features a boat-shaped island with wisteria, water lilies and lotus grown by Mr. Taniguchi. The story of the lotus seed — Journey of the Third Seed — is recounted as a children’s story by Jane Scoggins Bauld.
(photo by Bill F. Eger)

Taniguchi continued to be involved with the garden leading occasional tours. He died in 1992.

Terry Ward, bonsai master and garden volunteer was present for the planting of many of the older trees in the garden. “I’ve helped train several garden staff in the art of pruning the trees.” New staffer Robert “Spider” DeVictoria came to the Taniguchi garden two and a half years ago from Brooklyn where he recalled falling in love with Japanese gardens at the botanical garden there.

Terry Ward enjoys the view from one of several comfortable benches throughout the garden.
(photo by Bill F. Eger)

There are some outstanding maples and 21 kinds of bamboo in this 3-acre garden.

Thirty different garden clubs such as the Austin Pond Society, Texas Bamboo Society, the Austin Bonsai Society, the Austin Ikebana Study Group and other associations were organized into the non-profit Austin Area Garden Center in 1955. The Austin Park and Recreation Department owns the land. The Garden Center built the building, organizes volunteers, trains docents and staffs the gift shop, according to Donna Friedenreich, president of AAGC.

The Heart O’Texas Orchid Society donated a Japanese teahouse with a view of the Austin skyline beyond the bamboo. It is named Ten-Wa-Jin (Heaven, Harmony, Man) to convey once more Taniguchi’s message that man exists in harmony with nature and that a “garden is the embodiment of the peaceful coexistence of all the elements of nature.” 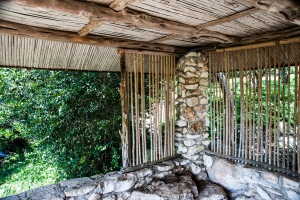 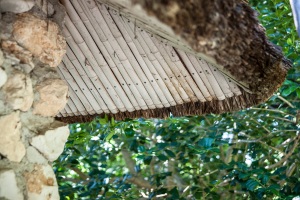 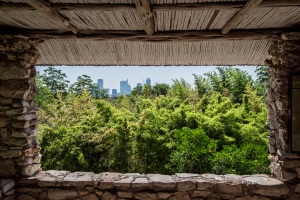 view from the teahouse
(photo by Bill F. Eger)

Stone gates flanking a newer slate path were a gift from Austin’s Sister City Oita, dedicated in November 1999 to mark the lasting friendship between the two cities.

English text is on the interior of the western gate.

The garden recently received a generous donation from the Orton family, which was used to reconstruct an existing path to meet ADA requirements, adding a new gate at the north end. 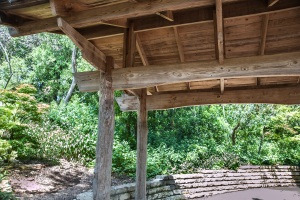 In addition, the garden receives welcome support from the Japan America Society of Greater Austin.

The city books weddings to be held in the garden and retains the revenue. Other events are partnered with AAGC and the proceeds are split. According to Friedenreich, one highly successful event funded repair of leaking ponds with Dragon Coat.

Each year, the garden hosts several hundred thousand people. Thousands of school children are reached by the Zilker Botanical Garden’s educational outreach programs and many school groups come for a visit. It was a delight to see the school children enjoying the waterfall, lanterns, niche in the stone tea house for tea cups, resident snake, and trimmed bushes all with respect and deepening calm.

One group of school children enjoyed the garden while we were there.
(photo by Bill F. Eger)

For more information on how those of you in the Austin area can support the Zilker Botanical Garden, e-mail info@zilkergarden.org or phone 512-477-8672.

Taniguchi garden at the Zilker Botanical Garden may be found at:

Should you wish to view a very sweet video of the Taniguchi Garden, check out this one created a year ago by Austin Otaku.

Unless otherwise credited, photos in this blog are by K.T. Cannon-Eger. Click on any image in order to see it full size.

Posted on June 20, 2012 by usjapanesegardens

one section of bamboo fence at Kumamoto-en

“Technical difficulties” — two words packed with so much meaning, perhaps even more than the proverbial “picture is worth a thousand words.”

We are traveling with three computers and there came a time when none of them would talk to the others let alone allow communication with the wider web.

Now, a few moments before we have to leave Telluride, Colorado to photograph a Japanese garden in Grand Junction then catch a train for the west coast, finally everything seems to be working again.

Apologies for the seeming silence. I feel eight gardens and three states behind in keeping this blog. So while I have a connection, here are a few glimpses of articles to come from San Antonio, Austin, Fort Worth, Dallas and Saint Louis.

Unless otherwise credited, photos in this blog are by K.T. Cannon-Eger. You may view a full size image by double clicking on any photo.

a rustic bridge “to walk over the moon” at the Isamu Taniguchi garden inside the Zilker Botanical Garden in Austin, Texas

school children spy a lizard in the Fort Worth Japanese garden 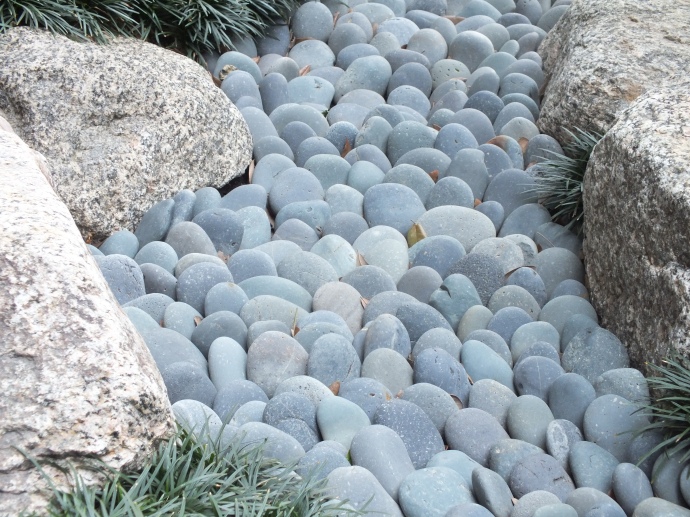