What else has been in the garden?

Posted on September 21, 2013 by usjapanesegardens 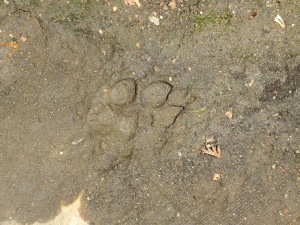 Tracks of wildlife are not uncommon at Sansho-en, the Elizabeth Hubert Malott Japanese Garden at Chicago Botanic Gardens in Glencoe, IL. This coyote track was found one morning near the shoin house.

What’s in your garden when you aren’t looking? Gardeners have to deal with more than the occasional insect infestation or small children climbing on stones.

Perhaps the coyote at Sansho-en was hunting something like the rabbits I noticed all over the lawn at Marston House in San Diego.

Late one afternoon, rabbits covered the lawns at Marston House in San Diego at the upper end of Balboa Park.

Birds seem to cause the most difficulty for gardens with ponds, especially birds that eat koi like a heron at Fort Worth and another at San Antonio’s Sunken Gardens at Brackenridge Park. 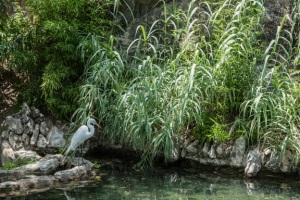 Focused, this fast beak scooped up several small fish from the pond at Sunken Garden in San Antonio. 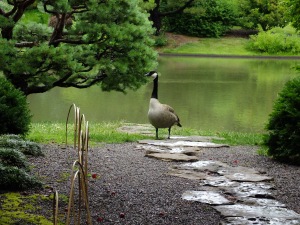 A wary goose halted momentarily at the end of the path near the plum viewing arbor at Missouri Botanical Garden. Geese leave behind copious amounts of waste making paths into minefields. 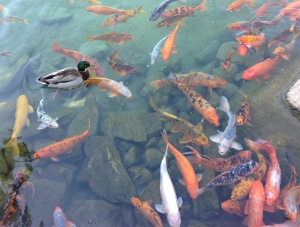 Ducks join koi in the pond at Ro Ho En in Phoenix, competing for food.

But of all the critters we came across, furry or feathered or two-legged, the smallest seemed to cause the most problems. My husband was unfamiliar with squirrels and chipmunks and was taking a lot of photographs. Horticulturist Benjamin Carroll at Sansho-en noticed this and commented that Bill “wouldn’t find them so cute when you see the damage they do.” 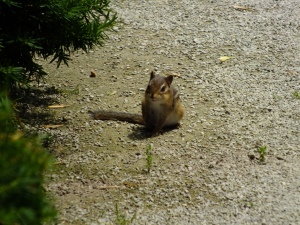 This bold fellow owned the path at the Anderson Japanese Garden in Rockford IL. 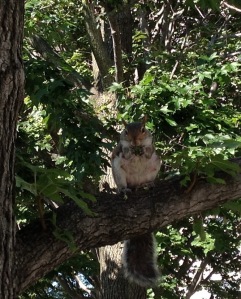 Photos in this blog otherwise uncredited are by K.T. Cannon-Eger.