More on the Atlanta Botanical Garden

Posted on June 2, 2012 by usjapanesegardens

This information comes from Amanda Campbell, horticulturist at the Atlanta Botanical Garden.

“In the 1960s the Atlanta Bonsai Society began a Japanese Garden which was largely a collection of bonsai plants. It was a charming and restful little garden, but it was eventually vandalized and the bonsai were stolen, so the Bonsai Society gave it up. In 1980 the Japanese Garden was restored as part of the Atlanta Botanical Garden. Initially the Japanese Garden had no water, and white sand was used to form “pools”. In a 1984 renovation, water replaced the sand. In 1996-97 the garden was renovated once again by a generous gift made possible by the Bonsai Society, the Cherokee Garden Club, the Ivy Garden Club and Mrs. Ferst. The structures, including the stone wall, were designed and constructed by Toshihiro Sahara.

“The design combines several styles of traditional Japanese gardens, including elements of a hill-and-pond garden, courtyard garden and tea garden. The chozubachi stone basin is used in a purification ritual before the tea ceremony. It is placed on the ground so that one must crouch over it to rinse the hands and mouth, therefore humbling and clearing the mind.  The machiai (pronounced mah-chee-eye) or tea garden waiting bench is a place to rest, reflect, and enjoy the garden.

“The Japanese Garden is basically a monochromatic garden; nearly everything is green, with variation of texture and shading. Color is used sparingly to highlight seasonal change – irises and azaleas bloom in spring, maples change color and drop their leaves in the fall. However most of plants used are evergreen.  Reverence of nature is the guiding philosophy in Japanese gardening. The main garden primarily contains plants from Japan, while the surrounding gardens highlight interesting plants from all over Asia.

A sweetly subtle way to acknowledge a donor — the name is inscribed on a stepping stone leading to the machiai.

“A collection of harp-string nandinas, or kinshi nanten, were added during the 1997 renovation.  These rare cultivars were popular in Japan from the 1600s to the 1800s. Also of interest are a number of dwarf conifers and Japanese maples. The large pine tree is a Virginia scrub pine, Pinus virginiana. It is planted and trimmed to give the appearance of great age. Other noteworthy trees include the weeping Japanese persimmon, Diospyros kaki, in the corner, the Stewartia monadelpha against the fence, and the weeping Japanese snowbell, Styrax japonica, next to the east gate. On the right are two groupings of Equisetum hyemale, or horsetail. This prehistoric plant is related to ferns, but it is not a fern and has no leaves or fronds. It reproduces by spores and spreads underground like bamboo.

“The Moon Gate, typically a feature of Chinese Gardens, was completed in 1985. When the moon gate was built it was necessary to cut the round window in the back of the machiai because it is essential to have a vista through the gate. Twice blooming Autumn Encore azaleas have been planted here. They bloom in spring and fall.

“The large lantern at the southwest entrance (near the hydrangea garden) is over 300 years old.  It was donated by Minaminippon Broadcasting Co. in Kagoshima, Japan, Atlanta’s sister city, in 1963.” 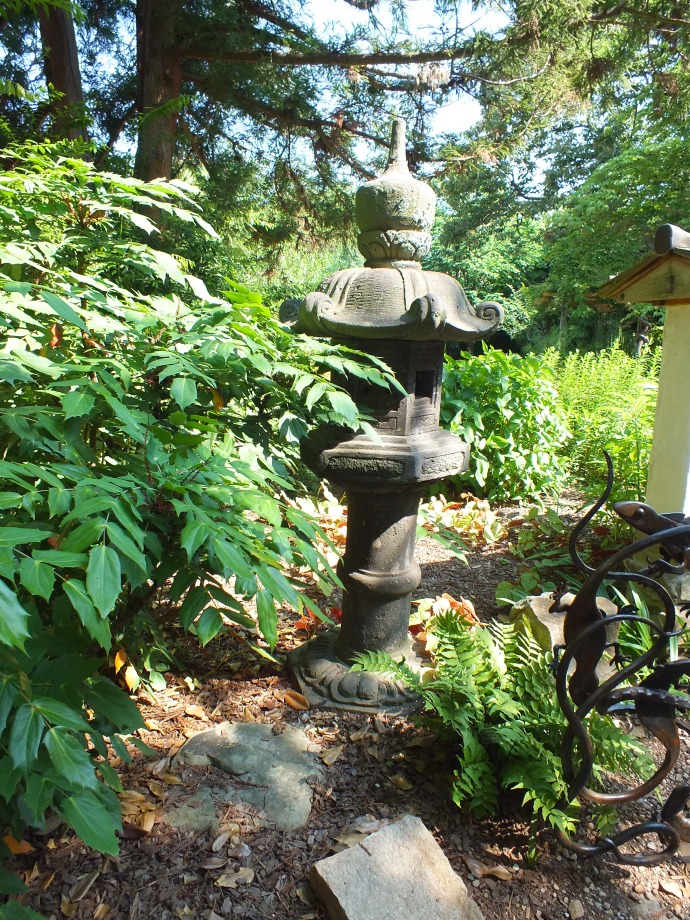 lantern by the back gate

The horticultural staff maintains the Japanese garden, contracting out a few chores. For example, the gate to the tea house was removed and sent out to repair termite damage.

Toshihira Sahara mentioned above not only ran Architectural Woodworks in Atlanta, but also served as minister for a small Japanese congregation.