Gratitude for the Gardens continues

Posted on August 4, 2016 by usjapanesegardens

For one year, Friends of Lili`uokalani Gardens has dedicated substantial volunteer resources to the task of thinning an overgrown bamboo thicket. Friday, August 5, 2016, we hope to finish the removing all dead stalks from the last two clumps. This will make continued maintenance of the area much easier.

“This will make the area much better for the annual Queen Lili`uokalani birthday festival,” said Kenji Kuroshima.

Come join Friends of Lili`uokalani Gardens from 8 a.m. until noon. Refreshments will be provided and with advance notice lunch will be ordered.

Below are a series of photos showing progress during the past year. 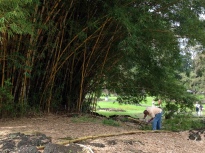 Meet at the bamboo thicket in Lili`uokalani Gardens for work and play Friday and Saturday, July 17 & 18 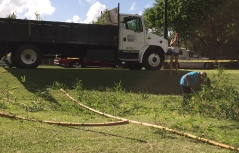 This area of the large thicket exemplifies what remains to be thinned on Friday and Saturday, August 21 and 22

Starting in July 2015, the bamboo contained innumerable dead stalks trapped tightly. Over time, a great deal of material has been removed. Some of it was offered to the public for any craft projects they might have. The Bamboo Society joined in and offered workshops showing how to utilize bamboo in a variety of ways. Two dump truck loads were given to a local nursery to chip into mulch. The rest went to Hilo’s green waste recycling area at the County landfill. 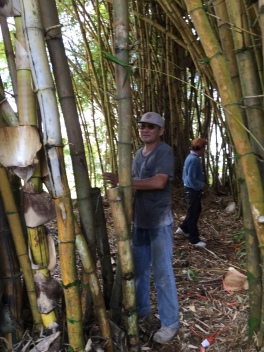 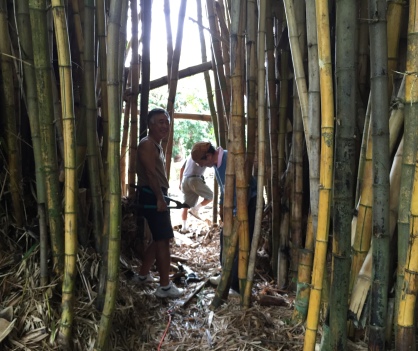 Slowly, workers opened up the thicket, re-establishing paths through the middle. The patch began to sing, according to Kenji Kuroshima of Kobe and Hilo, who directs the efforts. “Healthy bamboo sings. There is sun reaching inside. New views are opened up. And the breeze makes the bamboo sing.” 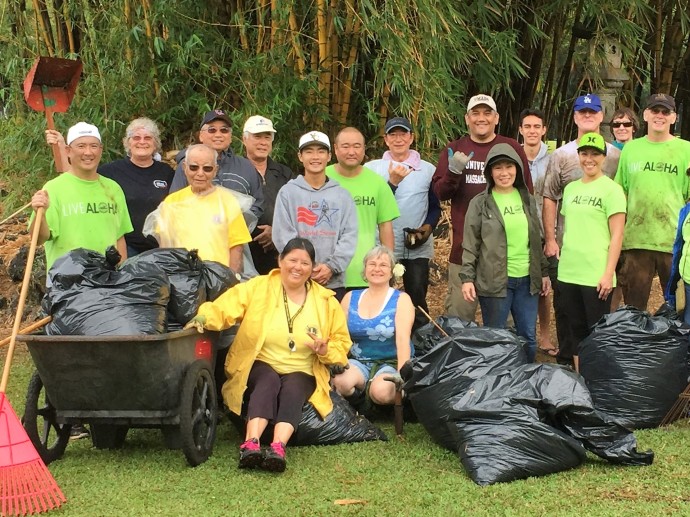 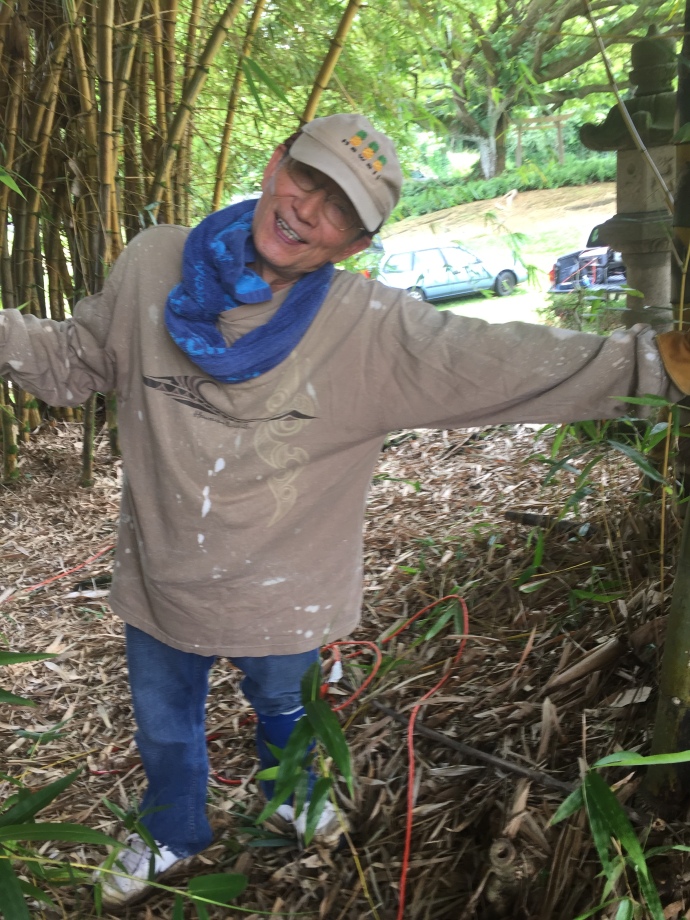 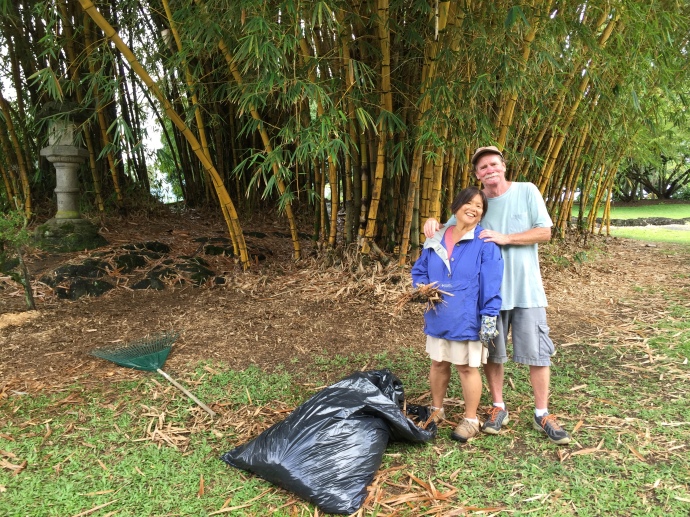 Mel and Casey Jones assist with bagging bamboo leaves. Now the lantern is visible as is the gravel pathway on the other side. 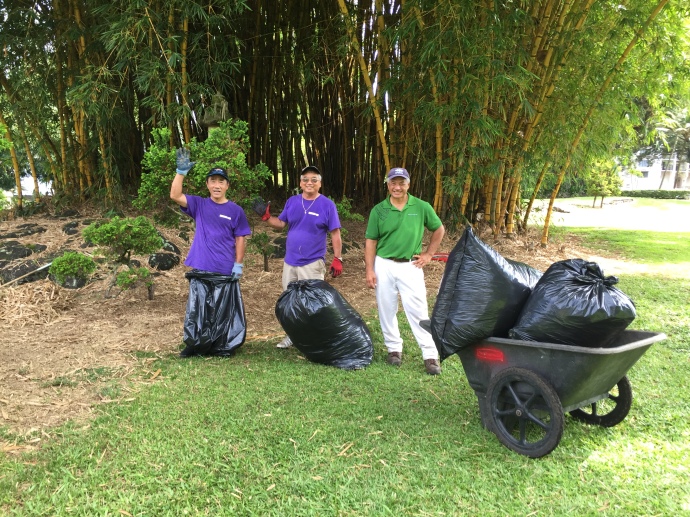 Yoshihisa Matsushita and Winston Towata of the Fukushima Kenjin Kai and Wally Wong of the Rotary Club of Hilo worked on the July 1, 2016 cleanup to prepare the area for the Fourth of July weekend and the Tanabata Festival the following weekend. 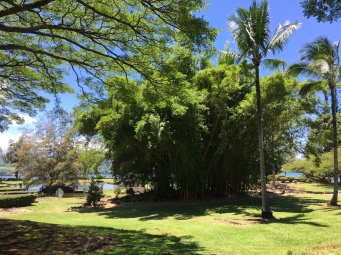 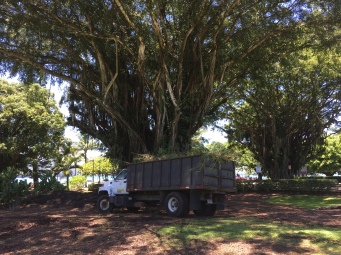 The County removed a dump truck load of green waste from the bamboo patch following Tropical Storm Darby in July 2016. 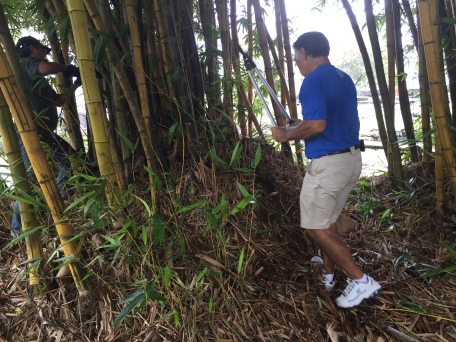 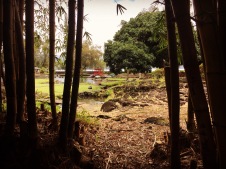 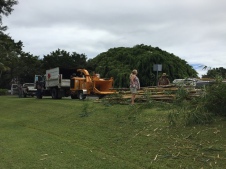 At the end of the day, August 5, 2016, more air flowed through the bamboo patch and several views through were re-established. The County brought their chipper and the remaining pile was gone in no time.

All photos are by K.T. Cannon-Eger, except the one of Mayor Kenoi’s group. That photo is by Ilihia Gionson. If you share photos or this article, please be nice and give credit.

Comments are welcome, but please do not waste your time trying to post spam as all comments are reviewed before they appear.