Dinner in Denver at Domo — Delightful and Delicious

Posted on September 29, 2012 by usjapanesegardens

Research ahead of our trip pointed us in the direction of Domo Restaurant in Denver. Whenever we mentioned it to friends and family who live nearby, the response was an enthusiastic, “Oh yes! Go there!”

Our friends know us to be adventurous and willing to enjoy most everything.

It’s a country style building in a warehouse district near a public housing project — just a little out of the way, but so worth it. I was not bothered by the sounds of trains passing — in fact enjoyed hearing the whistle blow as night fell around us. 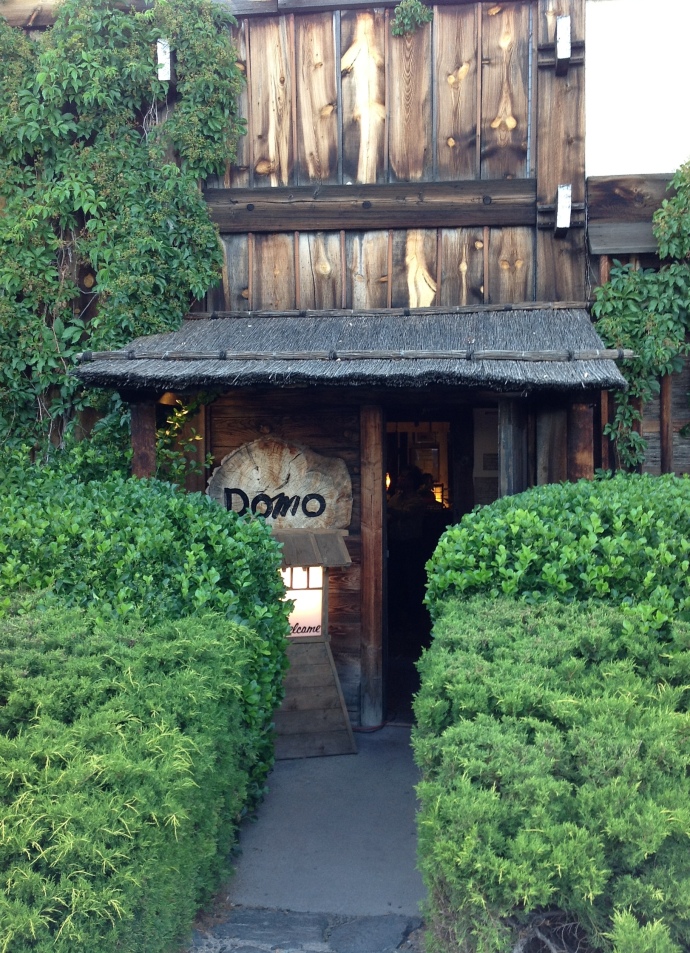 The entrance off the gravel parking lot

Our dear friend said he used to come here quite often a few years ago. It felt like home. But then it got discovered and crowded and he stopped going for a while. 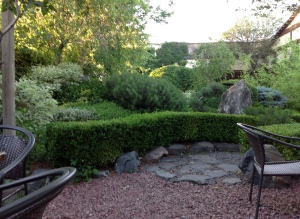 “The garden isn’t like anything you’ve been seeing. It’s much more informal. Like someone’s casual backyard,” he explained. And as we sat and looked around he commented how much the garden had matured since his last visit.

We were seated outdoors at a wooden table with wire chairs. Soon the table was covered with dishes — an abundant feast, tasty and hearty. 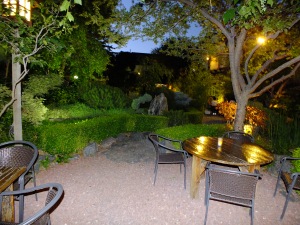 The garden a little later at night

The servers were attentive, but not overbearing, leaving us to enjoy our conversation and the surroundings. 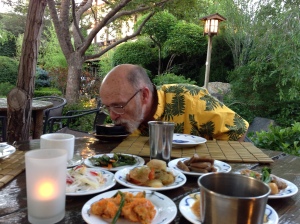 The sake filled a square cup to overflowing. The overflow was caught in the round saucer. “I need help with my manners,” said my husband to our host. “You are among friends,” he replied. “Just bend over and slurp.” Note the abundance of food on the table and a slightly different view of the garden beyond Bill. 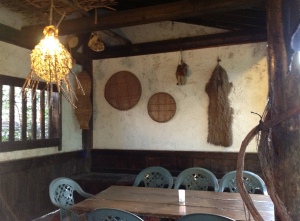 Folk art adorns the walls at Domo Restaurant in Denver in one covered dining area at one end of the courtyard. 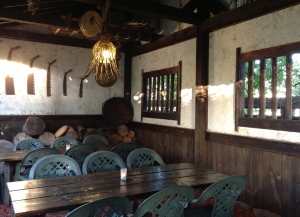 the other side of the room

Take time to wander a bit. The place is packed with memorabilia. There is a museum at one end of the courtyard and an aikido dojo.

At one end of the courtyard garden is a large farm-style structure. One side is an aikido dojo. On the other side is a folk museum.

Photos not otherwise credited in this blog are by K.T. Cannon-Eger. Click on any photo to see a full size image.