Posted on August 1, 2012 by usjapanesegardens

2014 Note: 2013 winter renovations in the Japanese garden were completed and the garden re-opened in the spring on 2014. To view some of the work accomplished please view the garden’s Flicker site. 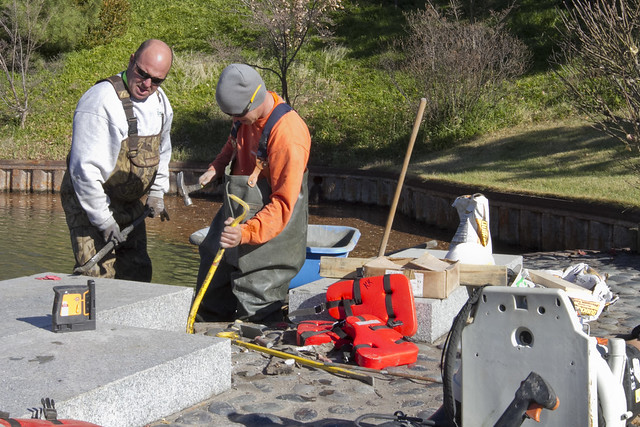 pagoda visible from Magnolia Avenue, plaque at the left side of the base reads “In Loving Memory Edwin L. Lopata 1909-1998
The Lopata Family”
(photo by Bill F. Eger)

Our photographer friend drove us along Magnolia Avenue where we peeked over the fence to the edge of the Japanese garden at the Missouri Botanical Garden. Beautifully trimmed trees accented the drive from there along Alfred Avenue to the main parking area.

inside the Climatron, we watch the rain pour down

We arrived at the appointed time and so did a massive Midwestern thunderstorm complete with heavy rain that drove us into the Climatron and with lightening strikes that sounded very close. We all agreed to postpone our scheduled tour of the Japanese garden for a few hours. It was a somewhat tense few hours as we waited for the storm to pass. This is a big garden and we didn’t want to miss out. It was as close as we came to getting rained out on this heavily scheduled month long garden adventure.

Upon our return in the early afternoon, I asked a worker driving an electric maintenance cart where we might find Teresa Pafford.

“You mean Teresa in the Trees?”

Well, that nickname makes sense to me. Teresa and I got to know each other during the 6th International Symposium on Japanese Gardening in San Diego during a black pine pruning class. But this gentleman was referring to her delight in getting up inside big trees and pruning them properly. It turns out that the trees I noticed as we drove along the first couple of blocks of Alfred Avenue are among trees in Teresa’s care.

Teresa shows K.T. a large piece of tree bark that came down in the storm.
(photo by Bill F. Eger)

As described on the Missouri Botanical Garden web site. “Teresa Pafford started working at the Missouri Botanical Garden in June 2003 as a gardener after graduating from Truman State University with a B.S in Agricultural Business. Most of her horticulture knowledge has been acquired here at the Garden from many experts and through conferences and seminars. She took a strong interest in trees, shrubs, and pruning within her first couple years of working at the Garden, which led her to arborist certification through the International Society of Arboriculture (ISA). She is now one of the primary tree climbers/pruners on Garden grounds. Her pruning mentor was and still is Ben Chu, who helped guide her through Japanese style pruning. One of her favorite things about pruning is seeing the results over time, whether it’s something as simple as seeing a wound callus over properly or something as advanced as training a branch to grow a certain direction. She truly is addicted to pruning.” 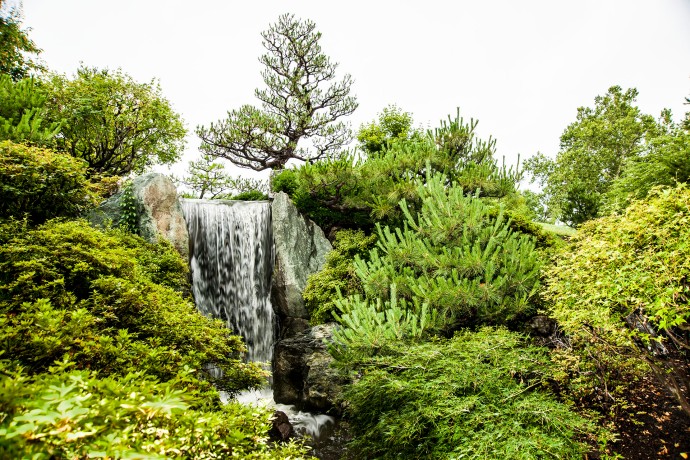 a waterfall leads to a stream
(photo by Bill F. Eger)

Her mentor, Ben Chu, joined Missouri Botanical Garden in 1982 after completing his education in Horticulture at St. Louis Community College at Meramec and working for a tree service company from 1978 to 1982.

and the stream meanders
(photo by Bill F. Eger)

the stream meanders past a gravel river bank and a touch of color
(photo by Bill F. Eger)

“In 1985 Chu became the supervisor of Seiwa-en and worked with its designer, the late Koichi Kawana. He currently supervises a staff of nine full-time horticulturists, including three staff members in the Japanese Garden, and six additional staff members in other parts of the Garden. Ben encourages his staff to design and implement their own designs and helps to evaluate the results. He wants their jobs to include learning opportunities.”

and the stream empties into the large reflecting pond with an island that holds a tea house for special occasions
(photo by Bill F. Eger)

This year, Chu was awarded the Foreign Minister’s Commendation from the Japanese Ministry of Foreign Affairs, recognizing his outstanding contributions to Japan-U.S. relations. The award was presented during a sakura planting ceremony in April, which marked the 100th anniversary of plantings at the Tidal Basin in Washington DC and the gift of 20 new cherry trees to Missouri Botanical Garden.

Seiwa-en began as the dream of the Japanese American Citizens’ League in St. Louis in 1972. JACL secured the services of garden designer Koichi Kawana who supervised construction and development until his death in 1990. Seiwa-en was dedicated on May 5, 1977. Kawana was born in Hokkaido in 1930. He became a naturalized American citizen in 1971. 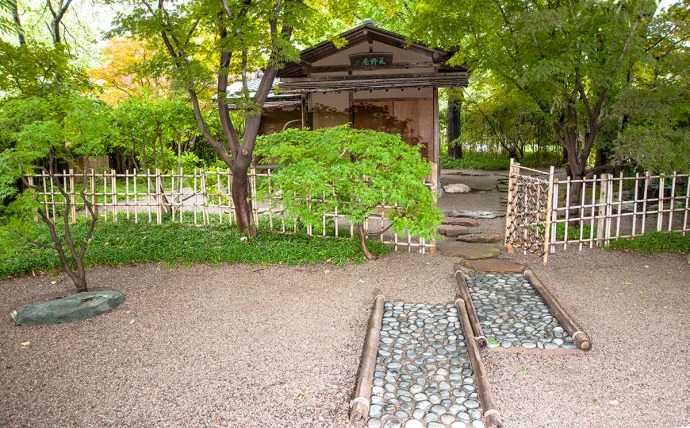 Kawana was a professor and lecturer on Japanese landscape architecture, Japanese art and environmental design at UCLA for 24 years. He is credited with major garden designs in several U.S. cities including Chicago and Denver.

a gift of Nagano to Missouri
(photo by Bill F. Eger)

A four and a half mat tea house was donated byMissouri’s Sister State Nagano. Nearby is a yukimi-doro, snow viewing lantern donated by St. Louis’ Sister City Suwa.

To see a satellite view of the Missouri Botanical Garden and the ponds of the Japanese garden, go to

Iris were donated by Adolph Vogt, a respected hybridizer of Japanese iris of Louisville, Kentucky, who passed away in 1992.

iris by the zig zag bridge

Using this modern view, it’s easy to spot the round stone beach, zig zag bridge and iris plantings, several karesansui, the foliage of the plum viewing area, bridges and paths leading to the tea house, even the wavy line of the lotus plantings at one end of the pond.

Born in Sheffield England in 1800, Shaw joined his father’s business making and selling iron and steel products. When a shipment of goods to New Orleans went astray in 1819, Henry traveled to the United States, located the missing products and, not finding buyers in New Orleans, took a paddle wheel steamer up the Mississippi to a small French village barely 50 years old – St. Louis.

This was a booming time as vast territories of the Midwest were opened up just a few years earlier by the Louisiana Purchase, which nearly doubled the size of the United States. Shaw opened a hardware store and found ready customers in the trappers, settlers and pioneers heading west. He was so successful in the next 20 years that he was able to retire at the age of 40 to travel and pursue his interest in botany. 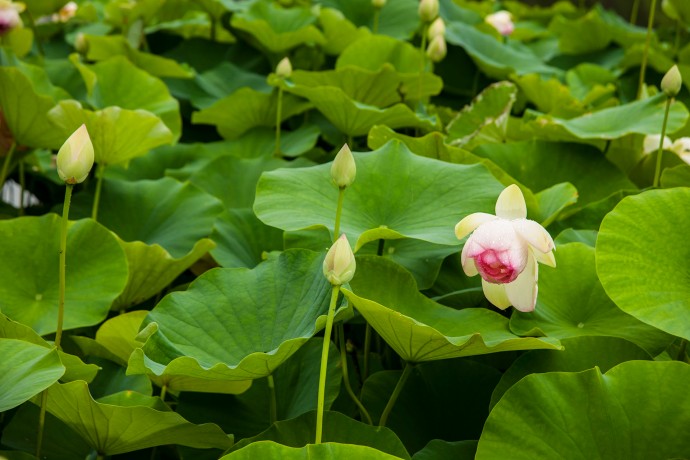 summer is the season for lotus
(photo by Bill F. Eger)

Returning from his travels to St. Louis in 1851, he engaged an architect and several botanists. He planned, funded and built what is now known as Missouri Botanical Garden on the land around his home. Among botanists he consulted were Sir William Jackson Hooker, director of the Royal Botanic Gardens at Kew, Dr. George Engelmann, a respected amateur botanist from St. Louis, and Asa Gray of Harvard University. Shaw’s garden was donated and opened to the public in 1859 making Missouri Botanical Garden one of the oldest botanical institutions in the United States. 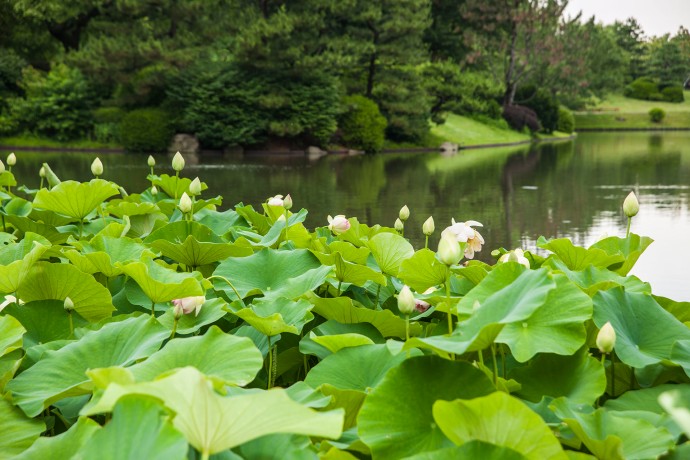 across the lotus patch looking toward the plum viewing area
(photo by Bill F. Eger)

Shaw’s philanthropy included endowment of the School of Botany at Washington University and assistance in founding the Missouri Historical Society. He died in 1889 and is buried in a mausoleum on the grounds. The 79 acres of Missouri Botanical Garden include Seiwa-en, a 14 acre Japanese garden built in the pond and strolling style.

large basin at the entry of Seiwa-en

Seiwa-en was not the first public Japanese garden built in St. Louis. That distinction may belong to the three-plus acre Japanese garden at the Louisiana Purchase Exposition, more popularly known as the St. Louis World’s Fair of 1904, which opened a year late to allow for more participation by states and foreign countries. Like the World’s Columbia Exposition of 1893 in Chicago, also a year late, many of the structures were constructed to be temporary.

parts of this lantern date back to the 1904 St. Louis World’s Fair
(photo by Bill F. Eger)

The Fair opened on April 30 and, through the closing ceremonies on December 1, nearly 20 million visitors availed themselves of this opportunity to see the world, revel in “palaces” dedicated to progress and have some fun. And as was true with expositions or world fairs in Philadelphia and Chicago, more people were exposed to the Japanese aesthetic presented in these collections of historic garden styles.

To see what the 1904 Louisiana Purchase Exposition Japanese garden looked like from the air, take this visual ride in the Ferris Wheel: http://exhibits.slpl.org/lpe/data/lpe240022874.asp?thread=240029909 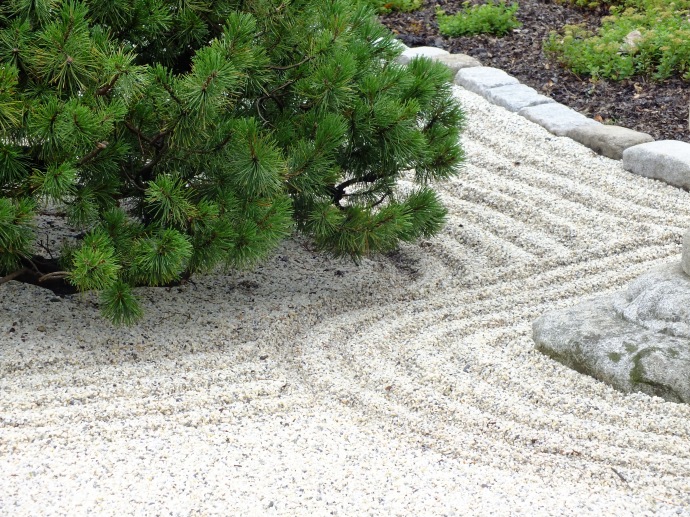 Photos not otherwise credited in this blog are by K.T. Cannon-Eger. Click on any image to see it full size. 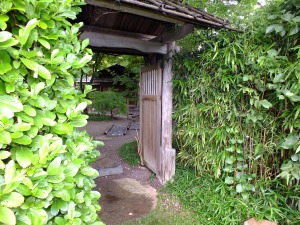 outer gate to the tea garden

A personal note: Much gratitude is due professional photographer Scott Lokitz who picked us up near Union Station and drove us around all day. There’s something wonderful about being in the company of a person who loves their town. Scott was full of special spots and history, insight and genuine delight. There’s also something inspirational about being in the company of an accomplished professional. Scott showed us his studio, a beautifully restored brick building on Russell Boulevard at Mississippi. Anyone in the St. Louis area needing a high school senior portrait, event documentation, architectural photos, etc. should consider Scott Lokitz. http://scottlokitz.com/services.html

The Sister State relationship between Nagano and Missouri

A news article from Kansas City in the Lawrence Journal-World on April 27, 1964 announced the sister state relationship between Nagano Prefecture and the state of Missouri.

A plaque outside the tea garden gate memorializes this Sister State relationship. The teahouse was dedicated on an auspicious date with a Shinto ceremony.

“The citizen of Nagano Prefecture, Japan, Sister State of Missouri, presents this teahouse to the citizen of Missouri as a memorial of the nice friendship between both states on the occasion of American Bicentennial year.”

While scanning photos for a family tree at the behest of my sisters and brothers, I chanced upon a photograph from my grandfather’s trunk. His family lived in Frankfort, Kentucky. After graduating from Harvard University in 1905, he joined the U.S. Marine Corps and enjoyed a 30 year career with postings in China, Japan, Puerto Rico, Nicaragua, Washington DC and many other places.

At first glance, I thought this image might be from one of those foreign locales, but with the aid of a magnifying glass I caught English words on the buildings. With confirmation from my friend Ken Brown, a world’s fair buff if there ever was one, I now add this photo of the Japanese exhibit at the Louisiana Purchase Exposition, popularly known as the St. Louis World’s Fair of 1904. 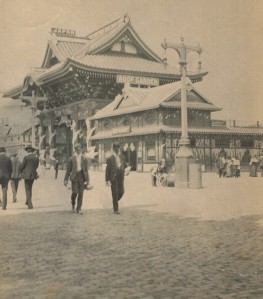 Kendall H. Brown, professor of Asian art history at California State University Long Beach, identified my grandfather’s photo as “the ‘dragon gate’ at the Fair Japan exhibit at St. Louis. The Japan bazaar was on the left, the restaurant on the right.”
The restaurant bears the words “Roof Garden.” Photo courtesy of the Weitzel Family archives.

For additional views and information on the fair, visit

2 thoughts on “Seiwa-en — Garden of pure, clear harmony and peace in St. Louis”